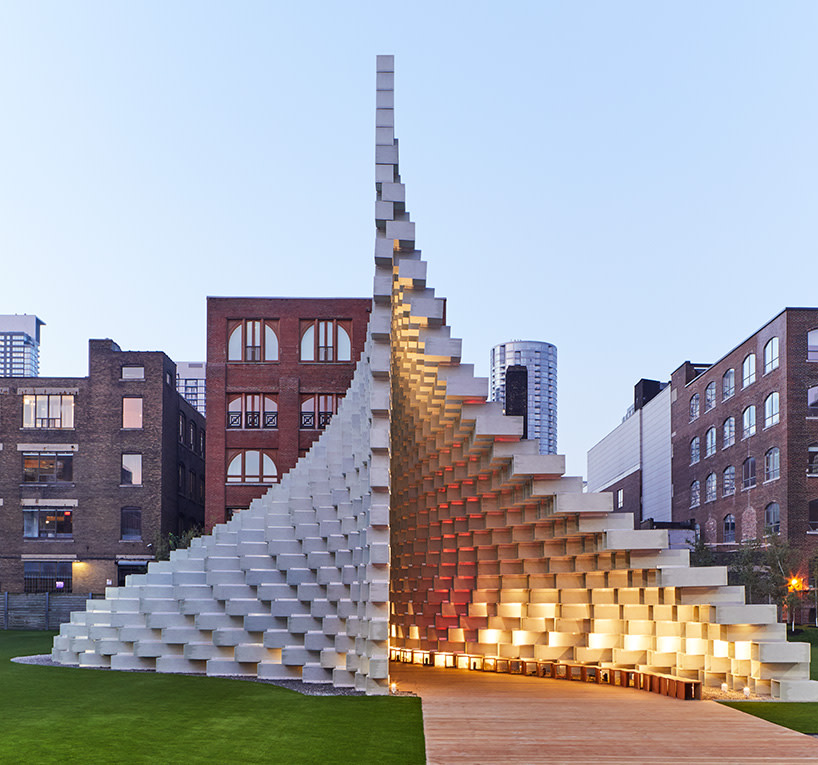 BIG’s “unzipped wall,” which served as the 2016 Serpentine Pavilion in London, has been opened to the public in Toronto under the new title “Unzipped.” Having been transported to the city and rebuilt in collaboration with Westbank, new photographs by Derek Shapton show the completed pavilion standing as a temporary place of showcase and events in downtown Toronto.

“Unzipped” is the first Serpentine Pavilion to embark on a multi-city tour of this kind, before ultimately landing in a permanent home on the Vancouver waterfront.

Constructed along King and Brant Streets, and opened to the public on Saturday 15th September, “Unzipped” plays on one of the most basic elements of architecture: the brick wall.

The 46-foot (14-meter)-high and 88-foot (27-meter)-long pavilion serves as an architectural showcase during the day, before becoming a “destination for unique programming, dialogue, and events” by night.

To create the installation, over 1800 extruded fiberglass blocks were stacked on top of each other, parting to form an “unzipped” entrance to an interior cavern. While open in Hyde Park from June to October 2016, the pavilion attracted a record number of visits.

“Unzipped” will be open to the public through November 2018.

News of the pavilion’s opening comes shortly after BIG’s King Street West condo community was approved for development in Toronto.