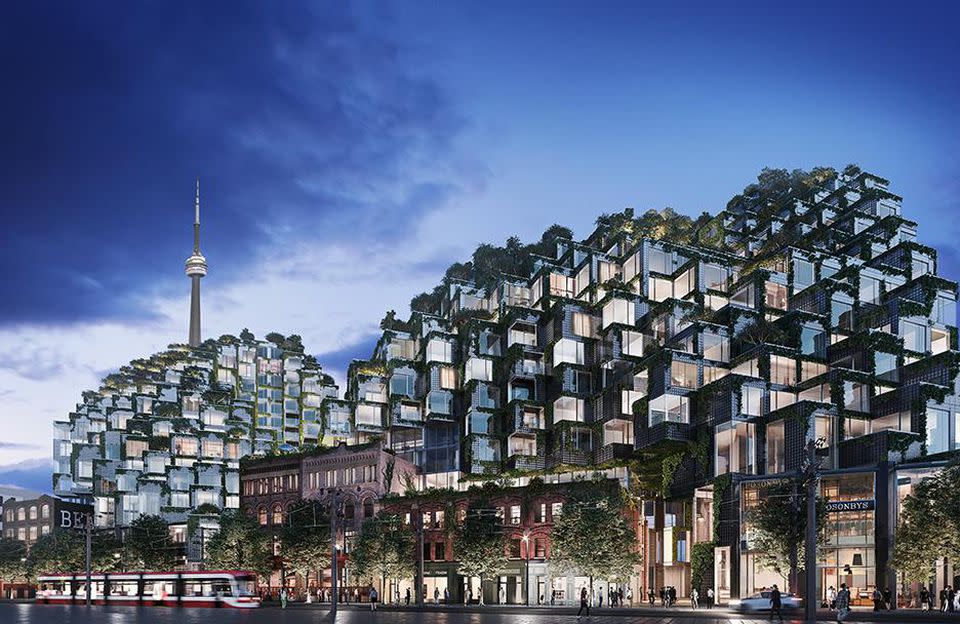 Sometimes you have to take an old idea and turn it 45 degrees. That's how trendsetting architect Bjarke Ingels decided to tackle the recently-approved KING Toronto, which will bring hundreds of residences and dozens of shops to the retail district on the city's King Street. He started with the concept behind Moshe Sadie's iconic Habitat '67 (built for the World Fair in Montreal) and added glass exteriors, private terraces and climbing vegetation to the exterior that developers are calling a "living skin" so the building feels like it is growing out of the ground. And the 45 degree tilt? That helps maximize both the light that enters each unit and the vertical space needed to accommodate the mountain-like shape they create.

The developer, Westbank, had the goal to foster a sense of community in the high-density urban hub, which was also the initial inspiration for Habitat '67. Yet King Street is much less car-oriented so the street level retail has to fit in around a courtyard and the wide walkways that hold the crowds. It will also have an unusual water feature called Cloud-Maker that makes a mist descend during hot summer days. Cloud-Maker collects rainwater in an underground cistern and returns it above ground through fog-emitting nozzles to create 'a powerful ingredient of atmosphere and experience'. They also have plans for light installations that will animate the fog at night.

Here's a close-up rendering of the 'living skin' for the building's facade. The glass blocks are inspired by Maison de Verre in Paris and reflect light differently throughout the day due to changing angles of the sun.

The final project will bring about five hundred residential units to the development. Pricing and an exact on-sale date have not been announced, but now that the project has been approved sales are expected to start soon. For more information go to their landing page to register interest.