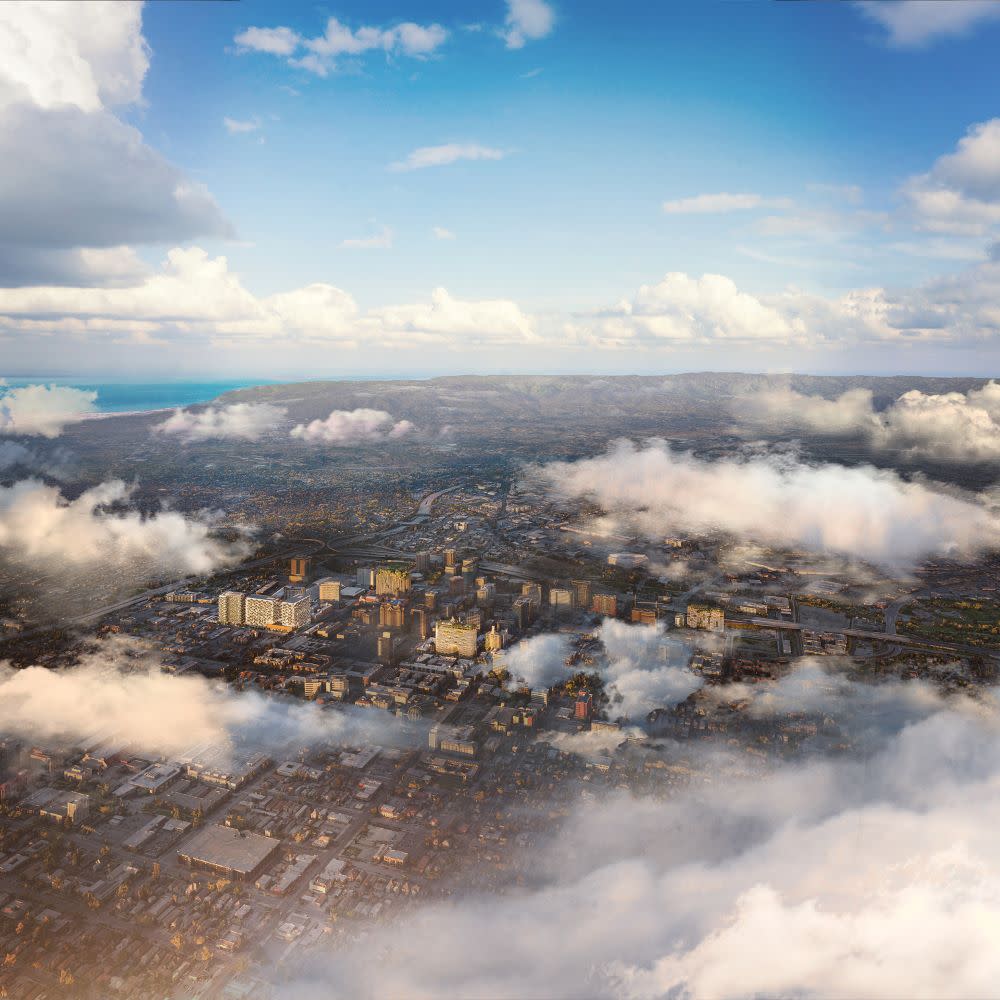 In the heart of Silicon Valley, where the landscape is dominated by self-contained tech campuses and low-density car-oriented urbanism, a major new development is bringing in a team of world-class architects to add a collection of mixed-use projects to downtown San Jose. Concentrating modern workspaces and residences near the growing city’s key amenities and forthcoming regional transportation links, the sustainability-minded development could be the start of an urban revolution in the valley.

He’s hoping to counter that trend by building more connected office spaces in the center of San Jose—near San Jose State University, planned BART and high-speed rail stations, and all the existing residential, retail, and cultural spaces in a city that’s expected to grow by 400,000 people by 2035. The five buildings are scattered across the downtown core but focus on providing environmentally friendly architecture that extends onto the street level, with landscaping and pedestrian-centric designs that encourage a more tightly woven urban fabric. Each of the projects will run on electric systems and have net zero carbon emissions, with offsets for both their operational and embodied carbon. Construction has begun on two of the five sites, and the developers recently bought a sixth for what Gillespie hopes will be an ongoing wave of transformative development.

What Gillespie is trying to do is insert buildings into the urban environment to fix those things he thinks are broken. In contrast to a more built-up city such as San Francisco, he says, San Jose offered both the space and the potential to make this happen at a large scale. “There is a canvas there where we could really make a meaningful impact relatively quickly,” he says.

The plan is strategically important for downtown San Jose, according to Mayor Sam Liccardo. “If we can pull this off, through all of the extraordinary challenges of this pandemic, it could really transform our city in a blink of an eye, which I would define as about a half a decade,” he says.

Liccardo acknowledges that San Jose is not exactly a hotbed of architectural significance. He says the downtown has a “squatty skyline,” largely due to its proximity to the city’s international airport. “With a few notable exceptions, and those are primarily public buildings, our city is appropriately described as architecturally challenged,” he says. The proposed projects could help change that, both in terms of the city’s skyline and its pedestrian experience. “It will raise the bar for public expectations for what development should do for our urban environment,” Liccardo says.

Gillespie argues that world-class architecture is important to ensuring the project can have a significant impact on the city. He’s pulled in most of these big-name architects for other projects in cities such as Vancouver, Seattle, Toronto, and Tokyo, but this will be Westbank’s first collaboration with Chicago-based Studio Gang.

The firm’s principal, Jeanne Gang, says she was attracted to the project by its ambition but also Gillespie’s focus on social equity and climate issues. The building her firm designed for the development is trying to push some limits on energy efficiency and environmentally sustainable materials. Using mass timber as its main building material, the mid-rise office and retail building has low embodied carbon, and Gang hopes it can serve as proof that mass timber can work at scale. “We really have to make this complete shift towards these newer wood technologies. There’s no option. It’s one of these things that has to be embraced,” she says.

The building features a facade of blocks filled with angled wooden shading, a low-tech but varied way of controlling the amount of direct sunlight coming into the building. Its topographical shape also creates areas for green roofs and planted patio spaces that, though designed before the pandemic, are an even more important feature now. “The idea of indoor-outdoor workspace and more fluidity between inside and outside, especially in a place with a wonderful climate like San Jose, it makes total sense,” says Gang. “It should be mandatory to have outdoor space.”

Amounting to 750,000 square feet, the new building also includes and connects to an existing 1980s office building that Studio Gang is adapting for reuse as a more energy-efficient workspace. This kind of reuse, she says, is an important part of reducing the development’s carbon footprint and helped guide the future-focused design of the new building next door. “It needs to be flexible because there’s always going to be changes,” she says. “We’ve been really honing in on that with the structural system and the quality of the spaces. You could easily imagine this building becoming residential someday.”

This kind of adaptation may become more important as Gillespie’s vision for San Jose takes shape. His initial focus is on adding new and more-urban workspaces to the city to counter Silicon Valley’s industrial park past, but he knows that to truly make the transformation happen, office and residential will have to be better mixed. Future projects, he says, will try to augment the new office buildings he’s building with more residential spaces that can make the downtown core even more of a live-work community. Says Gillespie: “As we dug more and more into the shortcomings and the unique challenges that Silicon Valley has, we came to the realization that if we weren’t adding housing that was equally inspiring and was also net zero, then we’re actually contributing to the problem, not the solution.”