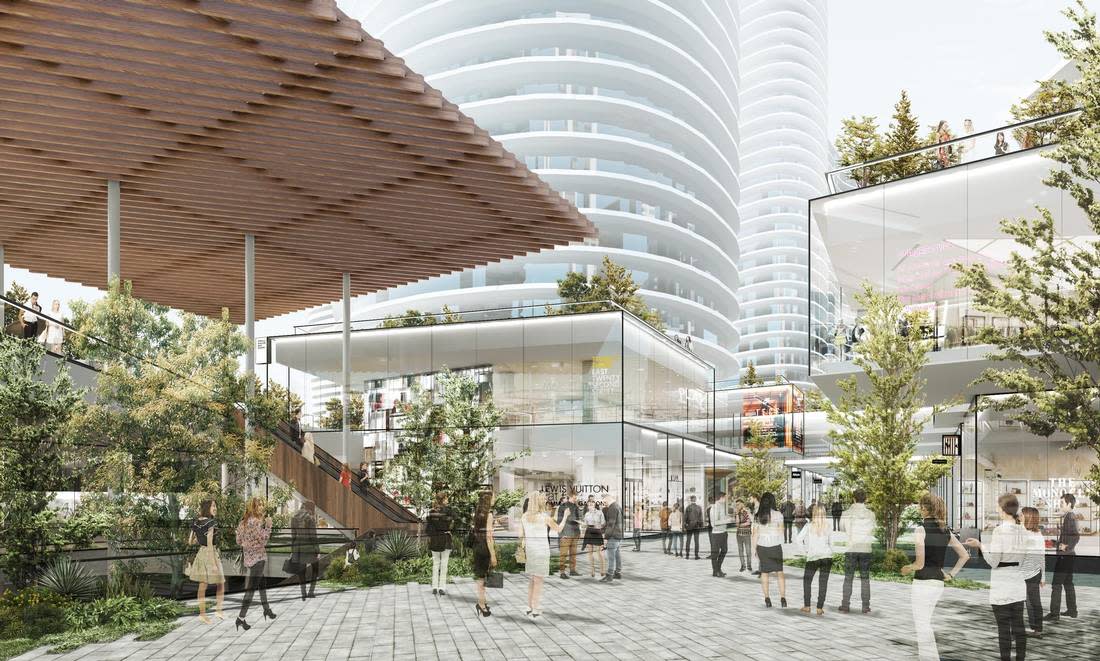 When the shopping mall at Oakridge in Vancouver opened in 1959, it represented the prevailing vision of the mid-20th century: a city centred on cars and single-family suburban homes.

Today, a vision of the 21st century is set to emerge at Oakridge after more than a decade of stalled ideas to redevelop the site. The latest plan includes nine residential towers, a large new community centre and park, music venues and a ballet school, and additional office space and an expanded mall.

It is underpinned by transit, given Oakridge's position on the SkyTrain metro system's Canada Line, and a new local energy hub that will reduce greenhouse gases.

Across Canada, suburban shopping malls and their vast parking lots are being overhauled. Oakridge is among the first several redevelopments around the Vancouver region. The trend is driven by developers seeking land to build on to meet a rising demand for housing, and malls facing an uncertain future in the age of online shopping.

In the case of Oakridge, and elsewhere, public pension plans are key financial backers, so Canadian workers have a stake in the success of such projects, even at a time when housing has become unaffordable for many people.

The B.C. Lower Mainland, where housing prices have gone haywire, is at the forefront of the mall of the future.

Westbank, the prominent Vancouver developer behind Oakridge, is partnered with QuadReal, the real estate arm of pension fund manager British Columbia Investment Management Corp. QuadReal and Westbank are marketing the project as a new "cultural hub."

The Oakridge site is large: at 30 acres, it's about two-thirds bigger than the Olympic Village on False Creek.

The City of Vancouver approved the redevelopment in principle in 2014, and it is to be finalized this summer, after which construction will begin. Total cost could reach $5-billion. A first phase is to open in 2022 and the project could be completed by the end of 2025. Oakridge would then be home to about 6,000 people, in 2,000 condos, 290 market rental apartments and 290 affordable housing units.

Westbank founder Ian Gillespie said the cultural venues will enliven the community with food and music festivals and performing arts. He is looking to buy a stake in Goh Ballet, the long-standing academy on Main Street, and house it at Oakridge. At a news conference on Jan. 26 to promote Oakridge, nine Goh Ballet dancers performed. Oakridge will also feature Vancouver's most extensive public arts display, the proponents say. Mr. Gillespie believes that this will set Oakridge apart from other developments.

"We do it differently," Mr. Gillespie said.

Architect Gregory Henriquez, who has often worked with Westbank, including the Woodward's redevelopment on the Downtown Eastside, said he hopes Oakridge becomes "a model for sustainable suburban redevelopment."

THE HISTORY AND THE FUTURE
The current moment in Oakridge's history is part of a long saga.

The site, in the 1950s, was one of the last areas of the City of Vancouver to be developed. In the 1980s, the mall was renovated and some office space was added alongside several dozen condos. In 2007, then owner Ivanhoé Cambridge, the real estate arm of Quebec's public pension plan, put out a redevelopment plan. Westbank and Mr. Henriquez came on board in 2010, to work with Ivanhoé. The rezoning was completed in 2014.

But problems emerged. Customers were turning to online shopping, which threatened the future of retail in malls. An aquifer was discovered close to the surface at the site, which would complicate construction. Ivanhoé had other new projects in the region, such as the outlet mall Tsawwassen Mills, and wanted to pull back at Oakridge. In early 2016, Ivanhoé said the Oakridge plan was "just not the right vision." Ivanhoé, the project leader, then decided to mothball the idea.

Mr. Gillespie said his reaction was "not fit to print." He persuaded Ivanhoé to sell to QuadReal.

QuadReal paid nearly $1-billion. The firm had been established two years ago with a mandate to expand. It has about $18-billion in real estate. That's about one-eighth of the assets managed by B.C. Investment Management Corp., which invests for more than 500,000 pensions, from provincial government employees to firefighters and teachers. Oakridge was QuadReal's first significant acquisition.

Remco Daal, who oversees Canadian real estate for QuadReal, said Oakridge will be a good investment because it is distinct from its competitors.

"You have to believe that this is a very desirable place for people to live," Mr. Daal said of the financial logic for getting involved in the project.

Another mall redevelopment of the same size as Oakridge is under way at the Brentwood Town Centre SkyTrain station in Burnaby, dubbed "the Amazing Brentwood." Vancouver-based Shape Properties and the Healthcare of Ontario Pension Plan bought the site for about $100-million in 2010. L Catterton Real Estate, a French group that includes Bernard Arnault, who helms the luxury goods giant LVMH , became a co-owner last summer.

The first two towers at Brentwood, both about 60 storeys, are scheduled to open next year, and a third in 2020. More are planned, and the initial total will be 1,700 residential units alongside new retail and a community plaza, at a cost of $1.5-billion. Shape Properties, as with Westbank with Oakridge, promotes Brentwood as a "neighbourhood designed for the next generation." Shape has plans to do the same at the Lougheed Town Centre station in Burnaby partnered with Greystone, a Regina investment firm whose clients include pension funds.

In the lower mainland, Oakridge and Brentwood are only two of a number of plans. The mall redevelopment trend is happening across Canada. RioCan, which owns about 300 malls in the country, plans to build at least 10,000 residential units over the next decade or so at 50 of them. Mr. Smerdon of Colliers said the trend is gaining speed and will "take a generation to fully play out."

A QUESTION OF PRICES
One issue is the cost of this new housing, given the high price of real estate. Westbank is best known for its luxury condos. No prices have been set for the Oakridge towers, of which the tallest two will be 43 storeys. Mr. Gillespie said the condos will not cost as much as some Westbank buildings because of the greater number of them to be sold.

"The project needs to appeal to a broader section of the market," Mr. Gillespie said.

Tsur Somerville, a real estate expert at the University of British Columbia's business school, predicted it will be "upper-end," given that the Oakridge area is on the expensive west side of the city.

But he said a project like Oakridge can be good for Vancouver, doing something fresh with an aging property: combining retail, residential and offices with transit is a win. "There are a lot of threads you blend together," Prof. Somerville said.

Developments such as Oakridge also help subsidize affordable housing and other community assets, Prof. Somerville added. Oakridge's community amenity contribution, which developers make in return for rezoning, was valued at about $150-million in 2014. It is higher now, Mr. Gillespie said. The community centre, with a new library and daycare, will be 100,000 square feet, nearly 50 per cent larger than previously planned.

A decade ago, Mr. Gillespie and Mr. Henriquez were set to open the Woodward's redevelopment. Westbank makes its money building towers such as the city's tallest, the Shangri-La hotel-condominium, but Mr. Gillespie said Oakridge in particular excites him as the "perfect sandbox" in which to build a community, to shape Vancouver.

"We are such a young city."