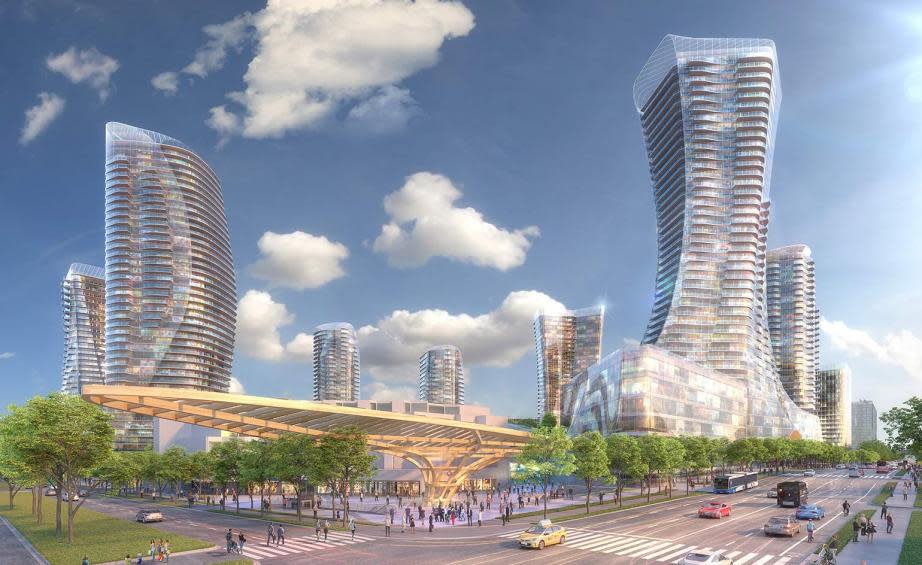 Westbank Corp. and QuadReal on Monday unveiled a plan to transform the Oakridge Centre.

They hailed the vision as more than a revamped shopping centre with new residential towers. Instead, they said it will be a “cultural hub” at the corner of 41st Avenue and Cambie Street in Vancouver.

He derided talk that the future of shopping centres is in creating foot traffic or filling empty retail spaces by adding condos. “Surely, we can do better than just graft residential on top of a shopping centre … It’s about creating a new topography.”

There are “dozens of ways” a cultural hub will come into being at Oakridge, said Gillespie. One he has in mind is for the Vancouver-based Goh Ballet Academy, which has long operated out of a building on Main Street, to “open a new practice at Oakridge, that will triple the size of their business and will bring a level of quality performing-arts school that is the kind of thing Oakridge is going to dive into.”

Gillespie also cited working with the city’s librarians to imagine community learning spaces, as well as adding a 3,000-seat music venue that will be “open 360 nights a year, so we can really curate a music scene.”

When asked to talk about housing affordability and fears high prices are eroding a community’s ability to enjoy such amenities, Gillespie said: “We are obviously a victim of our success … Vancouver and Toronto have achieved global-city characteristics where you get a divergence of local incomes from that price of housing. And it’s really important. When I went to school in Port Coquitlam, that my English teacher lived two blocks from school … It really does affect the health of the community. We need a more egalitarian and more diverse city. The answer to that is really complex, but it needs to be now and we need to do something about it. I hope that you are going to see ourselves andQuadReal and others taking a more direct role in trying to address that.”

Gillespie didn’t elaborate except to say “we call it workforce housing” and that it’s for “the schoolteacher, the police officer, the person who puts the cans on the shelf at Safeway. We’re not doing what needs to be done. We need to build it and it needs to be built close to transit and built now and not five years from now.”

He added: “I know for people trying to find housing now it sounds cheap coming from a real estate developer who is profiting from an increase in prices. But I also fundamentally believe we are part of the solution.”

The massive Oakridge project is slated to unfold over 6 1/2 years with construction beginning in late 2018. The first office and residential towers lining the property’s perimeter will go up by late 2022. The retail facilities and remaining residential towers will be in place by 2025, according to Remco Daal, president, Canadian real estate, atQuadReal .

Gregory Henriquez of Henriquez Partners Architects, which has worked with Westbank on projects such as the Woodward’s Building and Telus Garden, said the residential and office towers at Oakridge will have a sculptural nature, with edges curving and moving up and down to form shapes inspired by the words, “skin, skeleton and veil.”

Westbank is also tapping architect and designer Masamichi Katayama of Tokyo-based firm Wonderwall Inc., which is known for its recent work on Japanese retailer Uniqlo’s flagship store on Fifth Avenue in New York.

Katayama said he looked at old photos of Oakridge, dating to the late 1950s, and from there, saw a feeling of “hometown,” or a “warm, gathering place, bridging the past to the future and making a community between people.”

“Retail design is shifting from having a function of being a place to sell things to providing experiences that make consumers feel the DNA of the brand,” said Katayama.