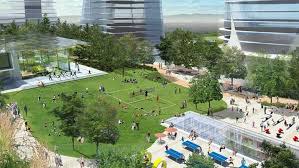 Green space will be built by developer in 2 phases. The Vancouver Park Board voted Monday night to approve a rooftop park along the Cambie corridor. The 3½-hectare park is part of the redevelopment proposal for Oakridge Centre that would see green space on the roof of the mall with additional green space at ground level.

The mall area could be transformed to include a mix of modern condo towers, townhomes, community facilities and green space. But the project has been controversial and has faced a great deal of opposition.

Four years ago, more than 100 people signed up to speak at a public hearing.

Earlier this year, the developer brought a new revised proposal forward to the public.

Next month, the project goes before the development permit board.

$1.5B Oakridge 'mega mall' redevelopment plan scaled back
The park, according to Park Board documents, is to be built by the developer in two phases. The first phase is expected to be finished by 2023 and the second by 2028.